The history of the Batley Sporting Foundation

Batley Rugby League Club has always sought to support and be an active part of the community of Batley. Over the years it has been involved in many ways, such as working in schools and with young people and other community groups. This has involved funded workers, the staff of the club, and volunteers.

A few years ago when external funding came to an end, it was decided that the best vehicle to continue and expand that work would be to set up an independent charity. The charity would be separate from the club working closely together, using the facilities and the valued expertise of the club, with an emphasis on sport but not be limited to sporting activity.

However, two projects requiring large-scale funding were proposed; one to celebrate the heritage of the Batley Club by identifying every player who had worn the shirt, giving them a heritage number, and setting up a Hall of Fame for those who had made an outstanding contribution. The second project would recognise the diversity within the community of Batley and seek to promote cohesion across gender, ethnicity, and age. National Lottery Funding was sought and obtained for these two projects and this has enabled the employing of workers, assisted by volunteers to see those project aims achieved.

It is the hope of the trustees that these projects will promote pride and celebrate the relationship & mutual support of the club with the whole community of Batley.

You can now donate to The Batley Sporting Foundation while just doing your normal shopping on Amazon – with no extra cost to you!

Follow this link and select “Batley Sporting Charitable Trust” to donate a portion of every eligible Smile.Amazon sale to our foundation.

Want to keep up to date with all that we do? Take a look at our newsletters to see what we have been up to!

Our vision is to promote mutual respect for all ethnicities, ages & genders and to mobilise the local community using the power of sport and other means. By working together with the community on local projects and events, we aim to bring a sense of ownership, belonging and pride to all members of our community and beyond

The face to face sessions have stopped for the time being, but if you would like to join the online weekly sessions please email [email protected]

Our brand new session in partnership with Dewsbury Memories, is aimed at tackling the issues of memory loss and social isolation in a fun, friendly and welcoming way.

The session is the 4th Friday of every month at the Fox’s Biscuits Stadium, anyone can come along and chat about all things rugby, Batley and beyond.  Everybody is welcome and the session is free with biscuits and hot drinks provided.

Next Session November 29th 10am

We work with schools in the Batley, Birstall, Heckmondwike and Dewsbury area, to provide lunch clubs & structured PE classes and also to deliver Mission Active Kirklees sessions.  Our sessions promote physical activity in a fun and engaging way, encouraging children to stay active as part of a healthy lifestyle.

We promote fitness for all abilities and run free community gym sessions, on Tuesday & Thursday mornings and Wednesday evenings, train your own way or join in with group sessions. Our current timetable is below, when we add new sessions we will advertise them here and on our social media pages:

We will be running a number of projects with the community in mind, these projects will be community-led and will be accessible to all. Watch this space for details of upcoming projects and events. If you have any idea for a community project or would like to help with one as a volunteer, send us an email with the contact details below.

We hope to start our newest project the Move Enjoy Network week commencing 29th March, aimed at improving men’s mental health and fitness. There will be informal sessions around walking and chatting for a start, with scooting and cycling planned for later in the year.  There will also be an opportunity for participants to get involved in our other activities, such as our Community Gym. We are also looking for volunteers for these sessions, for more information get in touch with Clare or Jon.

The Foundation is run by a board of voluntary trustees, all of whom are heavily involved in the club and are passionate about the work of the trust.  We also have 4 other people who do work for the Foundation, below are their profiles and roles:

Clare is the newest member of the team, joining the Foundation in February 2019.  Clare has been volunteering with More in Common in Batley since 2017 and is a member of Batley Community Choir for almost 5 years, which has helped her make many local connections and learn about the communities in Batley and surrounding areas.  Out of work, Clare likes photography, the gym, and the outdoors.

Dan has a long history with the club, previously working as a full-time Rugby League Development Officer for the Bulldogs. Dan now volunteers for the Foundation coaching in schools, helping on match days and also with the holiday clubs, as well as juggling a full-time trade as a plasterer.  Dan has been playing rugby since the age of 7 and started coaching at just 16 at Batley Boys ARLFC and continues to coach Tots ages 3-5 and also the Open Age second team. 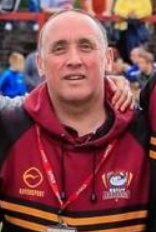 Paul aka Woody, is an experienced coach and member of the Community Team. Woody spends much of his time doing the important work of coaching in schools, running PE, lunchtime and after school sessions, you can also find him at the Fox’s Fanzone on matchdays 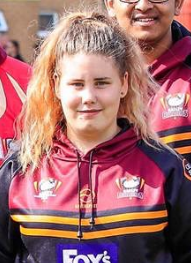 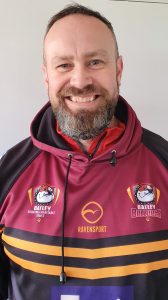 Jon is a long-standing and well-respected member of the Community Team, Jon has a passion for community work and is a very popular face at the Mount.

Mohammed joined us in the first half of the year as a volunteer, he is a very keen cricket supporter and is hoping that England manage to win their Ashes bid this year! 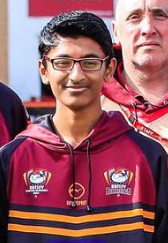 Bilaal is currently doing Duke of Edinburgh Bronze award and has chosen 3 months for volunteering and skills and 6 months for the physical aspect of the course.  He likes football and badminton and supports Manchester City and England, he also likes rugby and supports Batley Bulldogs. 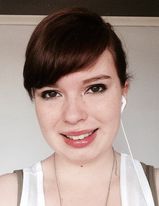 Maisie was born and bred in West Yorkshire and is a recent graduate. She has joined the team to help run the website and social media for the community team. Probably the least sporty of the volunteers but is pretty good with computers.

If you are interested in becoming a corporate or community partner with us, please contact the Community Engagement Managers on the details below.