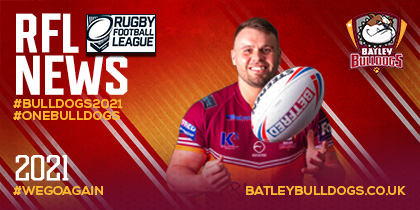 The National Lottery is to become an official partner of the Rugby Football League and of Women’s and Girls’ Rugby League. The partnership is further evidence of The National Lottery’s commitment to helping sports, and specifically women’s sport, through the effects of the pandemic.

The partnership will see the support of The National Lottery acknowledged through a range of branding across the sport’s premier men’s and women’s fixtures. In addition, The National Lottery will be the title partner for the England Women Rugby League Mid-Season International versus Wales on Friday 25th June, Halliwell Jones Stadium, Warrington, KO 6pm.

There will also be a range of opportunities for National Lottery players to get tickets to major fixtures and to the Mid-Season International, including sought-after VIP tickets.

Almost the entire Women’s Rugby League 2020 season was lost to the Covid-19 pandemic. This means that the majority of women and girls have not played their sport since Autumn 2019. The impact of the cancelled season risked interrupting the significant momentum across all formats of the girls’ and women’s game. Since the RFL launched the Women’s Super League in 2017, the size of the girls’ and women’s playing community has increased by 53%.

The National Lottery has played a crucial role in supporting sport across the country during the pandemic. This has included commercial partnerships with a variety of sports, including Wheelchair Tennis, Rugby Union Sevens and non-league football across the four nations. Alongside this, over £150M of National Lottery funding has now been distributed to grassroots sports organisations across the UK.

Ralph Rimmer, CEO the Rugby Football League, said: “The growth of girls’ and women’s Rugby League at all levels has been wonderful, which made the impact of over a year of not playing so hard for the players, coaches, volunteers and clubs. But we bounce back with this new commercial partnership and with the support of The National Lottery, and we look forward to kicking off our vibrant domestic competitions, followed by a mid-season International, and the excitement of a home World Cup this autumn. Our thanks to The National Lottery who share our vision and understand that Rugby League changes the lives of the girls and women involved.”

Sports Minister Nigel Huddleston said: “We’ve been clear that we must continue the push for greater participation, employment, commercial opportunities and visibility in the media for women’s sport. This announcement is great news for Women’s and Girls’ Rugby League. As we look ahead to the start of the 2021 professional season, this funding from The National Lottery will provide the sport with certainty as we work towards getting crowds back at matches as soon as possible.”